I have a Home Assistant instance running in a Docker container on the Raspberry PI. The configuration is exposed on the Docker volume so I can access the file and change it. I followed the instructions to get the Spotify integration running in the Assistant and quickly turn this into an alarm radio.

Since I already own a Spotify account, it was not difficult to set this up:

Make a note of the integration name. You'll need it later. It's "Spotify MyUsername" on my end.

It pretty much gets added to the Home Assistant dashboard automatically. I went a step further and added an automation for this. My speaker system is connected to the Home Assistant from before so this turned out to be a perfect opportunity to go down this route. I wanted to have the "Liked Songs" as a playlist to run, but Spotify is not making it a playlist. Here's the entrance to the rabbit hole if you want to see how the "Liked Songs" was requested to be a playlist. For now, I opened it in a dedicated application on the computer, selected all songs with Ctrl+A and added them to a new custom playlist that I can work with.

In the automations section of the Home Assistant I did the following: 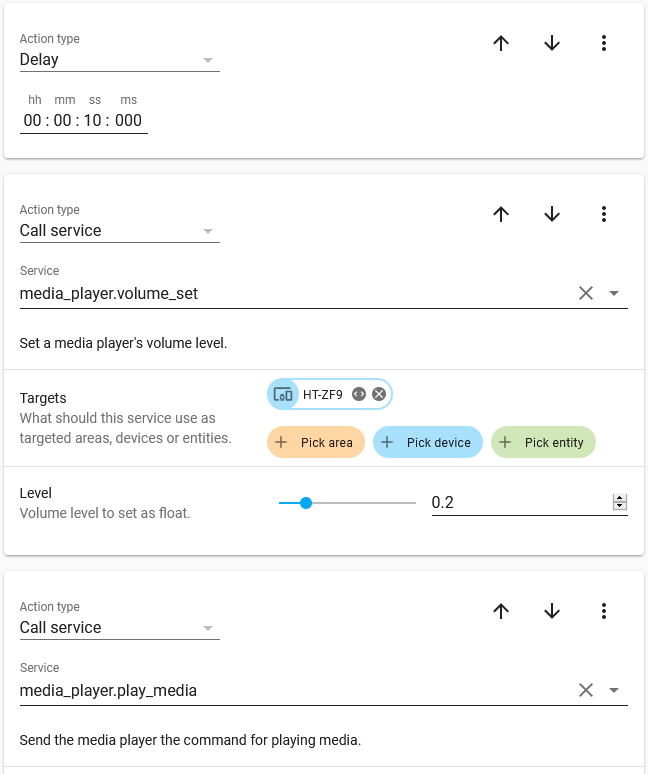 Save and exit the automation. Run it to try if it works. There might be some tweaking involved from your end for the action "Delay" if it takes a long time to power on the system. I'm wondering if "Wait" would be appropriate. There's also a question of the Spotify integration with the speaker system. I didn't figure out where the source will end up, but I'm not complaining. It works.

I perceive home automation as a hobby at best. I'm still poking around that. The results of tinkering can be seen here. I'll probably need to publish the automation scripts in some public repo eventually.