The year was filled with good things and the bad. Mostly good. It's hard to complain looking back. After all, we did more than expected.

I am keeping my publishing frequency of once a month, but like I said before, I lost some of the data when the SSD failed along with a plethora of components so the two consecutive articles were done late December. The restrictions were loosened up so we got to travel, but I miss just staying at home in a way. I also published Cuply in the Summer but need to come back to it to see it in action this year and iron out any kinks.

Moving on to the recap. A friend said that revenge traveling was trending. Being holed up during the pandemic meant that we saved enough money. Coupled with some additional planning meant that we didn't waste our days off. Usually our trips are self-organized and follow a bit of a template, we prefer to take accommodation near the city centre, and then rely on hop-on-hop-off buses and free walking tours to get a better sense of the space and history.

As for domestic travel, a couple of friends came over so we revisited the usual spots in Dublin and around our place, as well as finally went on a tour of the cemetery. My parents visited at one point so that was a blast, too. However, we did some domestic travel outside of Dublin, too, taking a road trip with friends:

Right now it's back to planning out this year and making some resolutions yet again.

The temperature finally stabilized in the apartment. We got some things cleaned up and met up with some friends for a pint or three. Right now we're waiting to play another N7 session, but no go so far. The fireworks outside make our friends' dog scared so I'm writing a bit.

We made a cocktail for tonight, another vegnog variant. 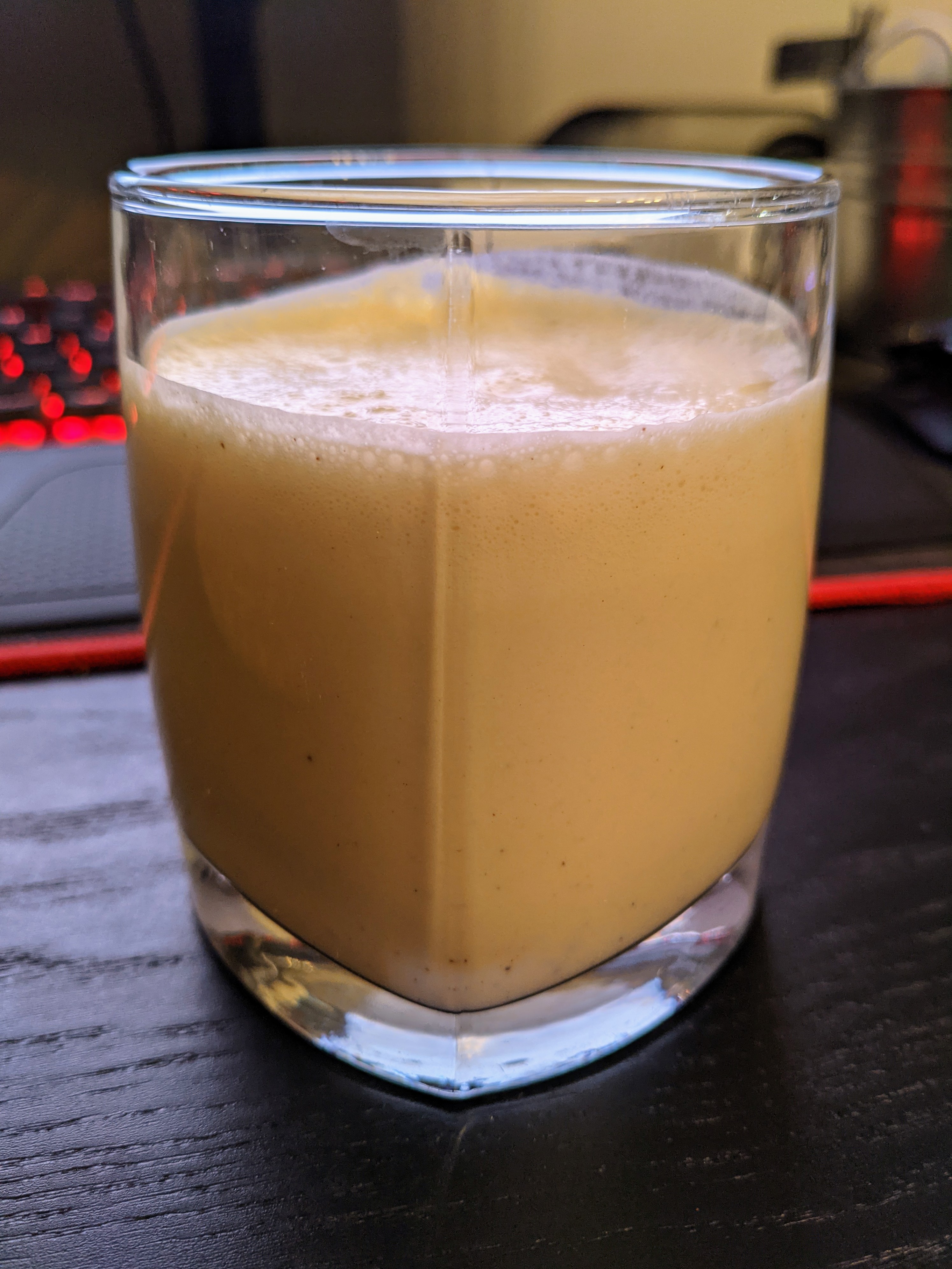 It comes in two parts. The ingredients are as follows with the first component being infused then added to the rest and blended away.

Put 1 cup of oat milk, brown sugar, cardamom pods, saffron, cloves and star anise in a saucepan and heat up for it to infuse. After it's done, let it cool and remove the solids. Then add the infused milk with the rest of the ingredients in a blender and blend for a minute until it becomes frothy. Let it cool in a refrigerator for later. Drink responsibly.

But our PC died and some drafts with it, so I didn't publish anything last month.

It was a painful experience trying to get the new components and checking out the extent of damage. Suffice to say, I managed to cannibalize the old PC and augment what I could with a solid hit on our wallet. The delivery was a nightmare and it took weeks to sort it out. Some issues are still ongoing.

The new rig was assembled just a few hours before our flight to Croatia. I couldn't do anything but wait until we came back.

We spent approximately a month in Croatia, working, visiting friends and spending time with family, but it was enough to start missing Ireland quite a lot. After all, our lives and routine are centered around that small piece of the planet.

Going forward, I need to set up better accessibility to the server, a better backup and a contingency plan... For watering the plants. Luckily there was no damage as the biological processes in plants slowed down so they didn't require water as much. We were also worried about the freezing weather breaking the water containers on the balcony left over from 3D printing, but it was all fine.

We came to an empty apartment. Everything was seemingly in order. We hit the store to get some food. We didn't even manage to unpack. That will happen today. I turned on the heating remotely before arrival but one of the radiators needed to be bled so it took longer than expected for room temperature to climb. It's finally OK at the time of this writing.

I'll publish something tomorrow as well just to keep my publishing frequency at least 12 times a year. For what is worth, we're alive, well and back.

Temperature is dropping in the northern hemisphere again. With the looming energy crisis, some people worry about heating. It's not that dire, though. Ireland is not reliant on the rest of the EU's infrastructure and the temperature oscillations are mild, too. There are no reductions, but the costs are rising. The situation is such that people keep warning the politicians against allowing so many datacenters in Ireland because the infrastructure can't support it. There's a concern this might lead to potential black-outs.

Cuply project was written about so it's time for me to take a short break from it. Even though it's hard for me not to come back. I believe it not to be finished so I will keep revisiting it to make sure it works properly. The bad weather keeps me at bay. Winter is approaching and we aren't on the balcony anymore so no hardware bits are done at the moment, only what's on the desk in front of me. I'm thinking about having a PCB for it, but need to figure out how to approach it. With the winter, again, we're slowly going into hibernation as well, so most of the things we do will happen indoors.

It is high time for me to kick myself into drawing and painting again. I guess it was a hectic beginning of the year and I cannot catch a break. We traveled (and still travel) a lot which I'll mention in the recap. I can tell that with all the travel, it was difficult to carry out things I had planned out, like Cuply. We did minor fixes in the apartment and rearranged priorities. So many things to do, so little time.

To kick off the painting, I decided to write this article. I got to have enough time this year to do things in spite of the distractions. The following paragraphs will describe my drawing setup.

I do things at the standing desk that goes up twice a day for an hour and a half. I automated that with ESP32 board. I can say that more focus comes from sitting, but I can't afford sitting all the time. I am not getting any younger and seldom do exercise (aside from the wall climbing which seems to be getting more frequent). This is at least countering the sedentary way of living. On the desk there's one 24" DELL U2413 monitor on the monitor arm so I can move it around should I have to. There's the standard keybord-mouse combination and a set of speakers on the desk, but they are not that important for drawing. The monitor arm is important since I have more space to work with.

The traditional drawing happens with a set of pencils (usually on the dark side with B2 being the most common), blending stumps, regular and kneaded erasers, some technical pens for inking and a small sketchbook. Sometimes I go for a specialty charcoal pens, but they're not used often in my repertoire. I can always display references on the big screen and, when done, scan things in with the scanner system behind me (HP 4130 doing a vendor lock-in) which is enough for home use.

I also hope to start with traditional painting of minis and I'll have more to say on that topic once I actually get to it. I'd need to use a spray paint primer, which is impossible to do indoors, but for the brushwork, I'll pretty much spend most of the time at the same desk. The only difference being one silicone mat so the paint doesn't spill on the desk surface.

When doing things digitally, which is my preferred method, I use a small Wacom Cintiq graphics tablet. It has all the usual pen gestures, from tilt (which is invaluable to have) to pressure. I also have a bluetooth keyboard for hitting all the keyboard shortcuts from wherever it's comfortable. I use a combination of Corel Painter and Krita applications of which I had a guest article on a slicing Python plug-in on Krita's blog. There are also Lazy Nezumi Pro and PureRef to help me out with the workflow.

There's one more thing and that's the ImgRef browser extension that I had Vesna do. It helps immensely with finding reference images for the finished work. A multi-page search. I'll have to poke her to publish the code.

The devil is in the details. Right now the system works, but as with all long-running projects, this one will need some time to see if it's viable. As of time of this writing, there are contacts loose and the relays are breaking down sometimes. I need to tighten up the contacts and stop using the breadboard which was a proof of concept anyway. Moving on from prototyping into a real product will mean that I need to sit down and start soldering on the connections. With all the #revengetravel happening, I was putting it off for quite some time.

Making Cuply pretty will mean that the mechanism will get enclosed in a proper box where I can only have the necessary connections sticking out. For power, communication and sensors. I will utilize 3D printer mentioned before for some of the stuff.

At the moment, Cuply code lives in the repository online, but I need to clean it up and write up some documentation. With all that has been happening this summer, it was hard to keep up. Things are flowing if nothing. Not overflowing :)