We're back in Ireland. This would mean that we were away and this article is deliberately late because we were both recharging our batteries, so to speak.

It's been twenty months, no vacation, staying put and waiting for the vaccine, but once we finally got vaccinated twice with an mRNA vaccine and were able to move around a bit, we decided to take the long way to see our parents. The direct flight was to Venice because at the time the incidence rate wasn't bad. We had to fill out the passenger locator form for Italy and, with both being vaccinated, we packed our masks and trinkets in backpacks and boarded the plane. Being locked down for a long time, we were noticeably more nervous in travel, but once we got the road underneath us, it started to feel familiar. We spent a few days in Venice, and while it was not crowded, there was still a big number of tourists in spite of the pandemic.

Venice is sinking, due to the climate change, and things are getting worse. They've set up MOSE project of closing the lagoon to combat the tides and they also believe that it can combat the rising sea level, but the project is not without its share of criticism.

With the worries out of the way, Venice is beautiful and its fame is pretty much deserved. As Vesna said, someone took out the roads and cars and put waterways and boats. It's a pedestrian city where one can walk, but it's boats all the way if you want to go around the city. Visiting can be a great experience because there are so many things to see, with the mandatory warning to avoid the usual tourist traps. For example, if there's a picture of food on the restaurant menu or a waiter inviting you inside, don't go there. They're out for numbers and overcharge things. 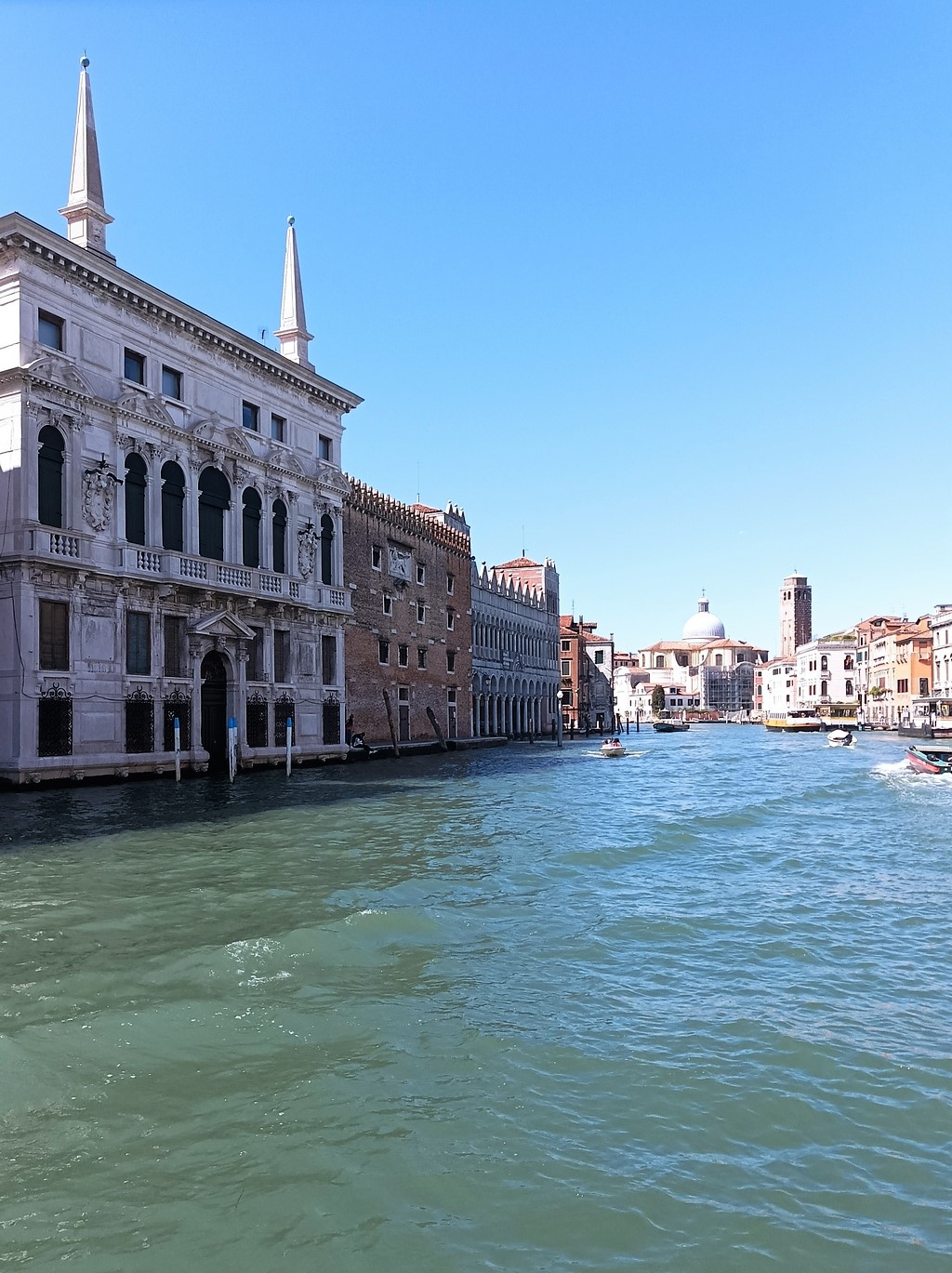 While in Venice, we also visited Dolomites which are breathtakingly beautiful. The height of the mountains offsets the vegetation line so the peaks turn naked at one point. The sky was clear and we saw them in all their glory. There was no snow because it was the prealp area in summer, but low white clouds can hit the peaks often.

After Venice, we were supposed to board a catamaran ferry to Pula, which for some reason didn't operate. We opted to go the long way across the mainland, taking a train to Trieste and then a bus to Pula the following day. The reservation of all the tickets and the overnight stay we needed was tricky to execute on a moving transport with the unstable internet connection and against high demand, and for a moment we were worried we'd be spending the night at the station. Because we were extremely lucky, that didn't happen. With one day lost on travel, seeing Trieste was like seeing an old acquaintance (because we were there before). It's still beautiful and we had a nice evening there.

In a way, I feel like on this trip we were following in the footsteps of James Joyce considering he was a Dublin native that was both in Trieste and Pula.

Next day we arrived in Pula. It is ridden with Austro-Hungarian architecural style, much like Trieste, but there's also a heavy influence from the Roman empire with arches and ruins and a huge free-standing amphitheater. There's also a strong remnant of Yugoslavia that can be felt in the city.

Being an old defensive port of the Austro-Hungarian empire, it has a number of fortresses surrounding it. Sadly, most of them have been left to disarray. The fortress overlooking the city is where the worlds meet. There are ruins of a Roman theater on the slopes of the fortress's hill, and beneath the fortification there is an underground complex, built as a nexus of evacuation routes during WWI. An expo on the old tram system that Pula once had was featured in its cold corridors. Speaking of rails, here's a fun fact: the rail system of Istria, the Croatian peninsula where Pula is located, is not connected with the one of the rest of the country. 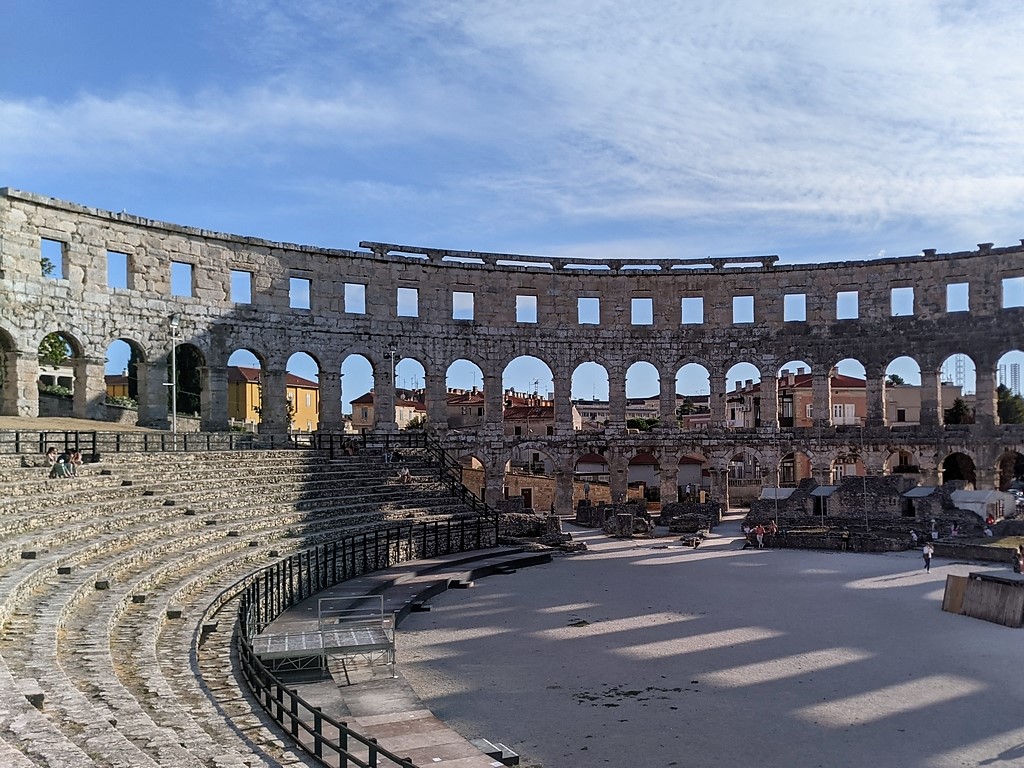 Pula has a great coastline, albeit a bit cold water for our taste and its very near the Brijuni national park where the Non Aligned Movement was founded by Tito, Nasser and Nehru. It held a great relevancy during the Cold War, being a balance between the east and the west and is second only to United Nations in terms of member countries. That a lot of people are not aware of it illustrates well how propaganda prefers simplistic polarized narratives, omitting historical complexity.

I digress. Moving away from the geopolitics, we left Pula after four days on a bus and headed for Krk to meet with our friends who recently had a baby. The island of Krk, and the town of Krk in it, is very touristy. Sure, there are things to see, but most of it is catering to tourists. This part of the vacation was mostly chilling on the beach. We filled up our itineraries in Venice and Pula like there would be no tomorrow so it was nice to not do much.

After four nights, we left the coastline and headed to Slavonija via Zagreb. Several buses later, we were pretty scared and bought antigen tests. Vaccine breakthrough is real and we wanted to test ourselves just in case. We didn't contract anything during our travel so it was safe for us to see other people. The rest of the vacation was a workation. Seeing folks, going down the memory lane, crashing our drone three times, getting a new ID, injuring my back while carrying appliances. You know, the usual.

We attended Vesna's cousin's wedding. There was an MD present so everyone had to provide the proof of vaccination or take the test. Luckily, no people were infected, buy I have to point out that it was still scary to be there and not know if there's a disease present in spite of being vaccinated. Vaccination is not 100% effective.

There's a number of small spots along the way we visited, but I didn't want to go into details with an already big article.

We saw some friends in Zagreb where we lived for eleven years. Some connections remain and some even got reinforced by regular video calls. It was a good year for online D&D. Between Slavonija and Zagreb, buses are faster than trains, but are much more lax with respect to epidemiological guidelines.

We boarded the plane on a rainy Thursday and went back to Dublin via Frankfurt. Next big trip might be the US because Croatia entered the US Visa Waiver program. The work will require me to go there and I won't need to get a visa for it starting December. Onward to new experiences.