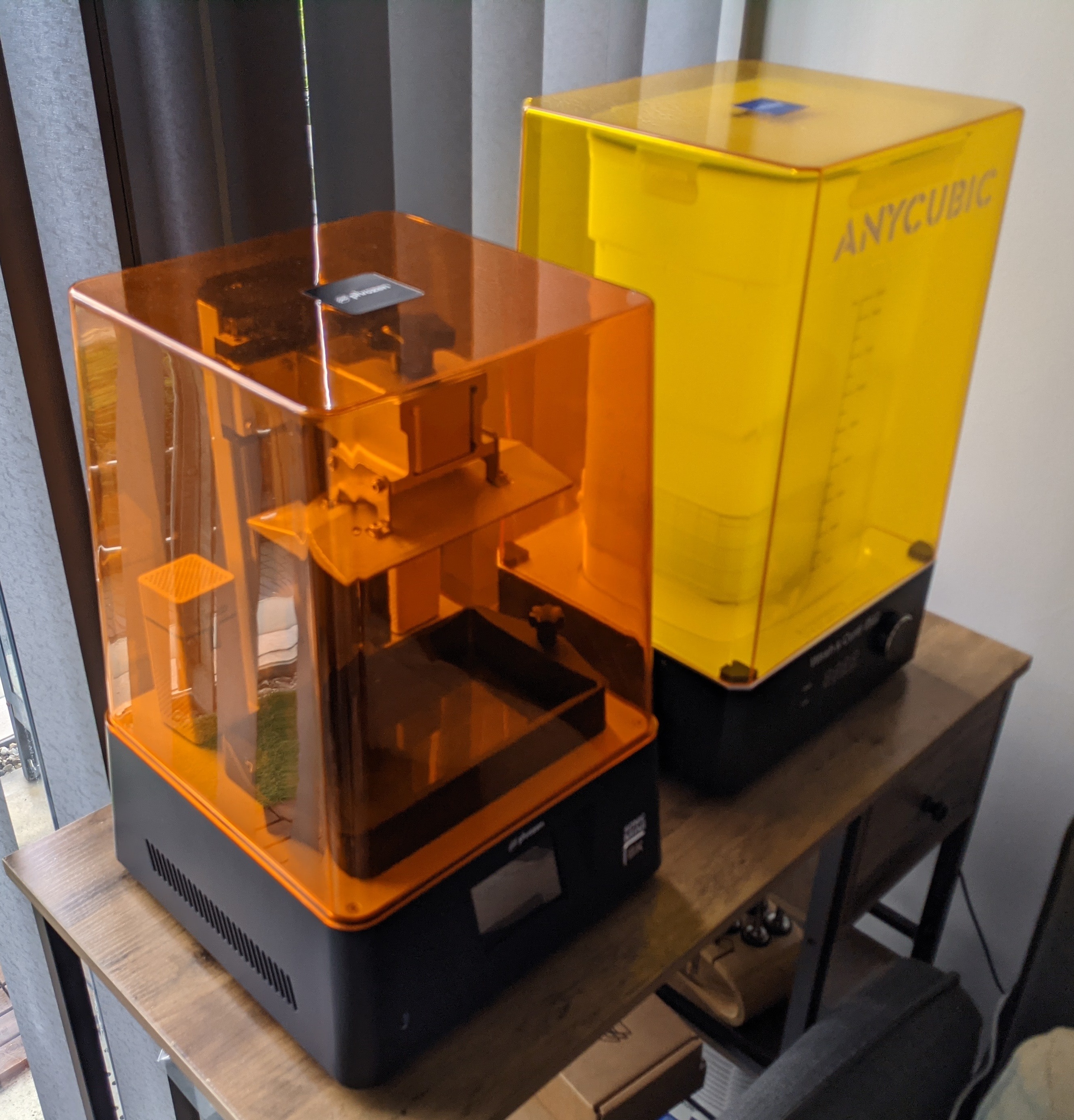 Buying a 3D printer was a decision we postponed for a very long time. With Vesna delving deeper into DM-ing D&D, we were thinking that we could host some games IRL for friends. Heck, I could even make some cocktails because we got a cheap cocktail making kit. Having miniatures would be nice, printing them would save money. Having a 3D printer would be useful for other models like small hardware parts, gifts, fixing broken things, etc. In the end we decided to bite the bullet and opted for a high resolution resin printer because they have gotten affordable enough and the level of detail is amazing. Right now we have Phrozen Sonic Mini 8K resin 3D printer.

What surprised me the most was that people who tinker on their computers usually have a notion that 3D printing is still filament only. Having a spool of plastic thread melted and drawn with, layer by layer, is not the only way. The other type is resin based, where the build plate is submerged in a vat of photopolymer liquid resin. The resin gets exposed to UV light from the screen below the vat and hardens on the build plate, layer by layer. The model is pulled out of the vat upside-down. These printers are faster by design because they harden the entire layer at once instead of a single dot drawing. They also have a higher resolution and less visible ridges between layers, but are messier and one needs to deal with toxic chemicals. To understand resin a bit more, Brent, from Goobertown Hobbies, explains the resin from the chemist perspective better than I would ever do.

There's also a concern where the fumes from melted plastic are a health hazard that needs to be addressed, but also the evaporation from resin, which needs more study. That's why 3D printers should be kept in a well ventilated room and PPE should be used. The toxicity for the environment and recycling the waste are also a concern. We don't plan to print a ton of miniatures, but we still need to address the waste properly. Like any other dangerous chemical, resin needs to be treated with respect. UV curing the liquid form renders it inert because monomers eventually form polymer chains that are not as harmful to the environment. The outcome is the same, the waste needs to be properly disposed of.

We bought Artisan Guild Patreon subscription to get some really nice miniatures for D&D. Surrounding a campfire with some heroes is a good start. We aligned all the models we wanted that could fit the printer margins. This was done in Chitubox slicer tool and the presupported files had most of the planes under 45 degrees vertically to counter the effects of gravity. The presupported files are great, but Chitubox can do it automatically if your models don't come presupported. One needs to know why printing is done at an angle and align their models properly so the need for the supports is reduced and it's easier to print without ending up with bent model planes.

Chitubox also needs a profile for the machine so it knows the parameters like screen resolution for the printing and what kind of resin is used. Regarding the printer itself, the profile file can be picked up from the manufacturer's pages and loaded into Chitubox.

As for the resin parameters, we needed to consult resin documentation. The problem was that the parameters were provided on the assumption that we would be using the same manufacturer's printer as well. We had to dig a bit to find the correct parameters for our use case. Exposure times and lifting speed are paramount for a successful print. After they were set, we sliced the file and had it ready for printing.

The resulting sliced file was under 250 MiB with over 1000 layers and around 50 grams of resin would be used. The bottle is 1 KG so it wasn't a lot. With the correct settings (don't ask, we had to print twice and we found out about the proper instructions afterwards), the printing process would take around seven hours.

There are a few steps we also had to do:

With the above done, and setting up the workstation and cleaning equipment (we used pet food trays to work on), it was time to print. PPE was used all the time: safety glasses, breathing masks, nitrile gloves. We also bought Elegoo carbon filters and put them in the printer chamber and turned them on. I know the melted plastic smell because I visited the plastic factory way too often when I was a kid. This one is not that bad, but still we'd like to play it safe. We then shook the bottle of resin for a minute and then opened it and poured the contents out in the resin vat. We covered the printer, inserted the USB memory stick with the file from Chitubox and kicked off the printing. Our window was also open so fresh air could circulate in the room with the printer.

When the printing finished, the resulting models were still dripping a bit, so we left them for a couple of minutes for the majority of liquid to drip away. It was time to wash and clean. With PPE back on (safety first), we removed the printer cover and transferred the build plate, with the printed models still attached to it, into the washing tub of our washing and curing station from Anycubic. We then filled the tub with tap water and covered it. We used the resin from Elegoo that is water washable because IPA (isopropyl alcohol) is tricky to handle and expensive to buy. That said, please have some. We bought a bottle in the local pharmacy because it is invaluable when cleaning the equipment after printing.

We covered the printer again with the lid to prevent the smell and the stray UV rays from reaching the resin in the vat and started a ten minute washing cycle in our washing/curing station. It has a lab type mixer so it was creating a vortex in the tub. After it was done, we removed the tub and pulled out the build plate from it.

It was time to remove the models with a spatula. They were really stuck. Safety equipment is especially necessary here because the crumbling resin supports start flying everywhere. After the models were dislodged, we immediately removed the rest of the supports by (gloved) hand and put the models on a paper towel.

We transferred the water from the tub into a separate container and left it to be cured by the sun. It must not just be poured down the drain because in uncured state it's still toxic to aquatic life. We used IPA to clean the tub, the grate, the build plate and left it all to dry. We then put the washing/curing station in the curing mode and put the models in it to cure for another two minutes. This is the general time for curing and it should dry them out. They were done, but we weren't. 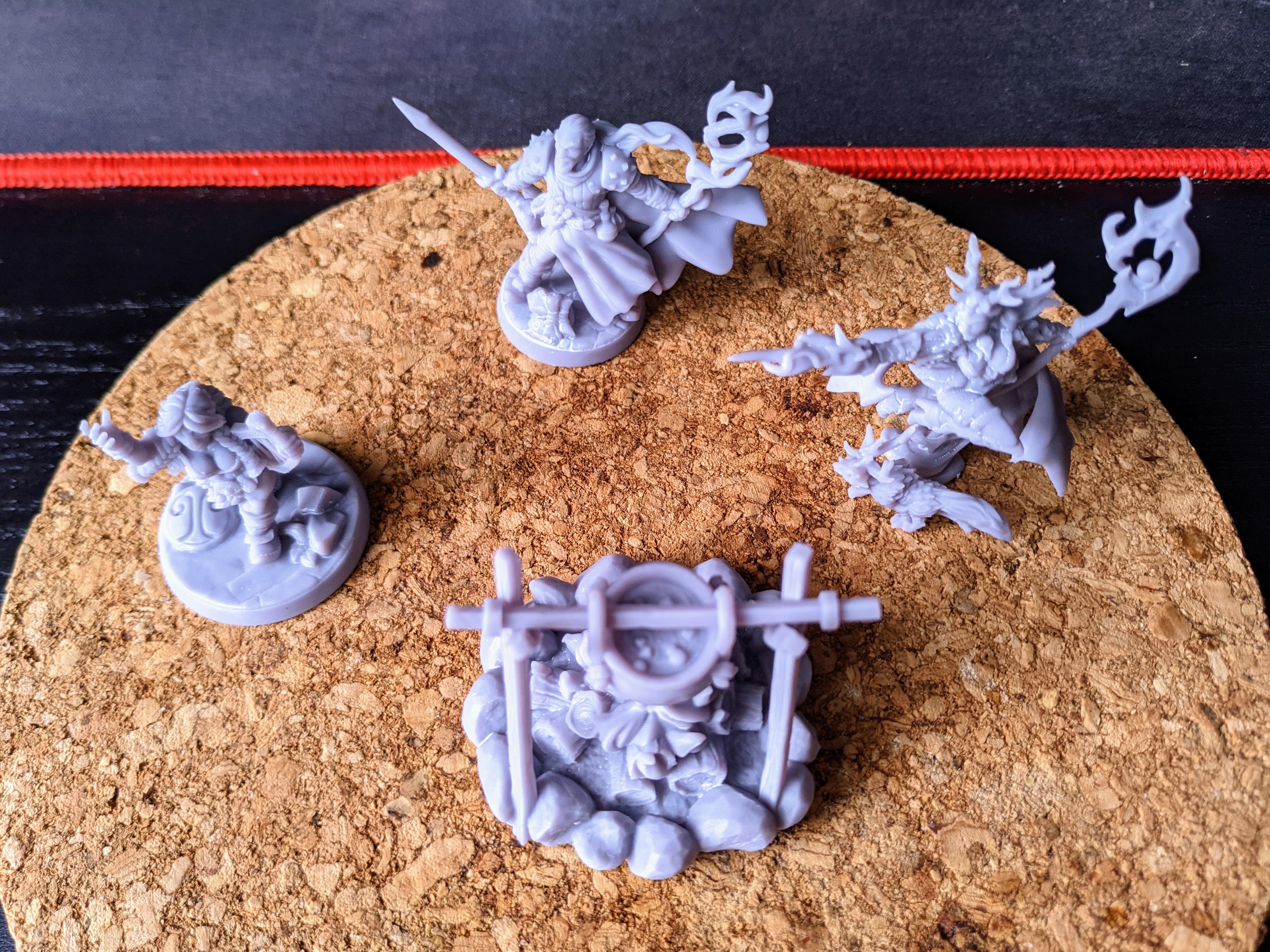 We uncovered the printer once more, turned off the carbon filters and took out the resin vat. We sieved the resin back through a funnel into the original resin bottle. Some people leave it in the vat, but we cannot afford that luxury because we don't have a dedicated workshop. We cleaned the vat with IPA soaked tissues since they're softer than paper towels and have a reduced risk of damaging the FEP film on the bottom of the vat. The vat needs to be cleaned after a failed print as well. FEP film on the bottom of the vat will wear out over time so it needs to be replaced eventually.

In the end, we left the used tissues and paper towels from cleaning the equipment (like spatula), the nitrile gloves from handling it all, etc., in a transparent bin bag in the sun. The dirty waste has to be left out a few days so the UV rays from the sun cure whatever is left of the resin particles.

The washing water could be reused for the next printing sessions until there's sludge in it collecting on the bottom. At that point, the sludge can be poured onto a plate so the sun evaporates the water and cures the rest of the resin so it hardens. The hardened resin is ready for waste disposal at that time.

As for the models... they had some post-processing left like filing and polishing where needed. I have to say that we're pretty satisfied with the overall outcome. What can be done with them later is painting them, but I'll leave it for another article. Of course, if something else needs printing, other than the miniatures, I'll be sure to mention it.